Manmeet Singh Bhullar
March 1, 1980 - November 23, 2015
State Memorial November 29, 2015 at the Jubilee
"Dear God make me more loving and compassionate, give more of myself in service, help me see the greatness imbedded in all and enjoy the moments!" - Manmeet Singh Bullar

Manmeet showed up at my door one day. Anyone who knows me, knows I don't pull a punch. Poor Manmeet had to deal with the wrath of hearing all about the sins of his predecessor, Hung Pham, as I tried to get Hung Pham's help with the issues I had at the Peter Lougheed Hospital with the birth of my daughter. Manmeet took it so well. In fact, he immediately sympathized and talked about his auntie, a midwife. I told him all of that could have been avoided had midwifery been covered as we could never afford the $3500 to have a midwife at the time. THAT is what he took from our conversation and knew that was an easy solution. We stayed in contact over the next while. He wanted to make sure I wasn't associated with doulas or midwifes in the sense that I would financially benefit in anyway. One day, May 4th, I got a call from his office telling me he talked to the health minister and it was going to get funded. I was literally one of the first people to know. I went to the International Day of the Midwife rally at McDougall the next day and told everyone the great news. No one believed me and laughed because, like me, they were incredibly cynical of politician promises, and in their case, have literally been advocating for funding for decades. True to his word, Manmeet had Hansard sent to our home. He actually mentioned me in the Legislature! I put that into my girl's baby book. A man of integrity, within weeks of being elected, he got it done. This was the start of our relationship.

During the second election, I was in the Alberta Liberal Party as a member. Due to the politics of the time from the leader of the moment, Dr. Raj Sherman, asked Iqtidar Awan to run. I had to help because I was a proud Liberal and I had asked Manmeet repeatedly if he would cross the floor and wear red, LOL! So back to the election, the night and day I'm scrutineering in Abbeydale. I'm worried sick that the Wildrose was going to win. (Ron Leech, Calgary-Greenway Wildrose candidate and evangelical pastor, wrote a 2004 article for the Calgary Herald that condemned gays. Don't get me started on the lack of libertarian values in the party claiming to be libertarian.) The results came in and Manmeet clearly won these polls. That was a huge relief to me because Abbeydale was suppose to be the Wildrose stronghold at the time. So the PC scrutineers told us right in the parking lot that Manmeet won. I was so happy that I celebrated right there. The Wildrose scrutineers were heartbroken and one even asked me why I was happy. I told her I was scared a homophobe like Leech could be a representative for me and how wrong that was. Besides, I had hope we could get Manmeet to cross the floor, LOL! (I know, I'm wrong and he was so loyal to the PC's. He told me that the colours didn't matter but as a PC he could things done. We agreed to disagree on that, LOL!) 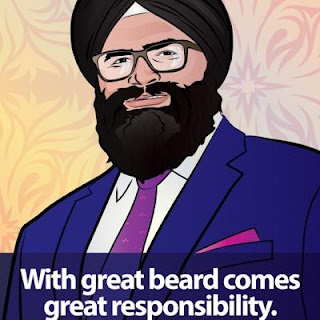 Over the course of knowing him, I talked to him about violence in the community and solutions. I confided in him the honour based violence policy I was working on before I submitted it at the Federal Liberal policy convention in Alberta as most of it would be a provincial initiative anyway. My hope was he could use it anyway and figure out the provincial Progressive-Conservative way to do it, even if they took the credit. The truth is, he wasn't that type of politician to take credit. If I didn't tell the story of the midwifery funding, no one would know about it because he accomplished so much and that was done literally within his first month of being elected with almost no fan fare. He once said the health minister at the time couldn't understand why funding midwifery was so important to Manmeet. He said I inspired him to advocate. The truth is, he just had it in him to advocate for the underdog. That is why I respected him so much. Our area, our communities, need strong advocates. While we were talking about the honour based violence policy, he told me that he was having people in his community getting mad at him because he was trying to stop child abuse and sexual child abuse. He even told me about a man who was threatening him. He didn't back down or off at all. I was so moved by him. Most politicians don't deal with the tough topics like that and certainly not to the community who funded him. But he did it anyway. He understood the need for strong, male leaders like him to speak up. I told him I would love to support him in anyway, not that he needed my help. Those wide shoulders took on so much.

When he took on the portfolio that dealt with child welfare, I was worried for him. I knew dealing with amazing advocates like Velvet Martin meant solutions that Manmeet could work with. However, I also knew there were very, very desperate parents and now adult foster kids that have been traumatized by the system. Only at the memorial service, hearing from his family and friends, was it clear that portfolio was as bad as I knew is it and he took every child's pain personally. His friend said even when encouraged to quit the portfolio, he angrily would shoot back NO! He knew he was strong enough and if the kids were going through the system, it's the least he could do to advocate for them. Sure enough, he did make positive changes in the system before moving on.

There was a stabbing at the night club where Manmeet's office was. I seen the police, and because I didn't actually know yet the details, I just went over to see if it was at Manmeet's office. There he was. That was a relief. I asked him if his staff were ok and no one from his staff was hurt. He told me it was stabbing next door and that he will likely move his office. He did. Across the parking lot, LOL! I was just happy he and his staff were ok. A little too close to home for both of us and of course, a worry about it being related to his work.

Manmeet arranged through my friend Saima a chance to meet Jim Prentice in the leadership race. Jim was the favorite to win, and I wanted to meet the ex-Indian Affairs minister for Harper. Poor Manmeet's team was scared when I said I would come, shooting Saima messages about me being this or that. Like a true friend, she defended me. I offered to send a bunch of questions to them I would ask Jim to help ease their worries, LOL! We went, and had a great time as many other activists and friends I admire were also in attendance. You can't ever talk to Manmeet at events like that because SO many people want to talk to him, LOL! He was more the celebrity than Jim was. I did talk to Jim too but he just assured me he was friends with Indigenous, politely disregarded me and moved on in true patriarchal, colonial form, LOL! It didn't matter as he moved on to Premier and thankfully took down not one, but two ultra conservative parties after 44 years of ruling. (What a relief and I'm grateful.) Manmeet and I likely would have agreed to disagree on that topic. I told him in the last election I could never vote for the ex-Indian Affairs minister under Stephen Harper and wished Manmeet wasn't on Jim's team because Manmeet knew I just adored him. He told our friend Saima that I should run. I told her that Manmeet only wanted me to run to split the progressive vote, LOL! I was happy Manmeet won but over the moon when Prentice stepped down after the historic NDP win. And for what's it's worth, Jim Prentice did an outstanding job as the Master of Ceremonies at Manmeet's service.

I was always busy and Manmeet was always busy. I would shoot him emails on Motion 503, gay rights, missing and murdered Indigenous women, Cindy Gladue and talk to him about Colton Crowshoe. He wanted to know more and hoped to meet Colton's dad. I told him about the family violence day conference happening in the community and told him he needed to be there. Last minute he could and because I was asked to go to Siksika to talk about missing and murdered Indigenous women, he could take my spot on Thursday. Instead of attending, he died a hero on the QE2. My friend Saima and I said Manmeet was a tank. He was. Of course it took a semi to kill him. Of course he had to be out trying to help someone after speaking at a local event in Calgary on the subject of violence.. Like his sister who clearly was unhappy with the lack of consultation on the decision to leave this world, I am too. Manmeet and I will have to agree to disagree on that decision as well.

He stood for women's reproductive health choices. He stood against child sexual abuse, standing for their human rights. He was a leader to men to stop violence. He stood against violence. The last thing he was working on was Afghanistan seeking refuge from religious persecution. He stood for human rights. He is one of my heroes. He inspired me to be involved in politics. I honour him, his friends, his colleagues and his family. Their years of work in his life and words lifted me today. I still can't believe he is gone.

Rest in peace Manmeet. I hope we, the community you inspired, can continue your work. Thank you for teaching me so much, most importantly, faith in service. #NiceToManmeetYou